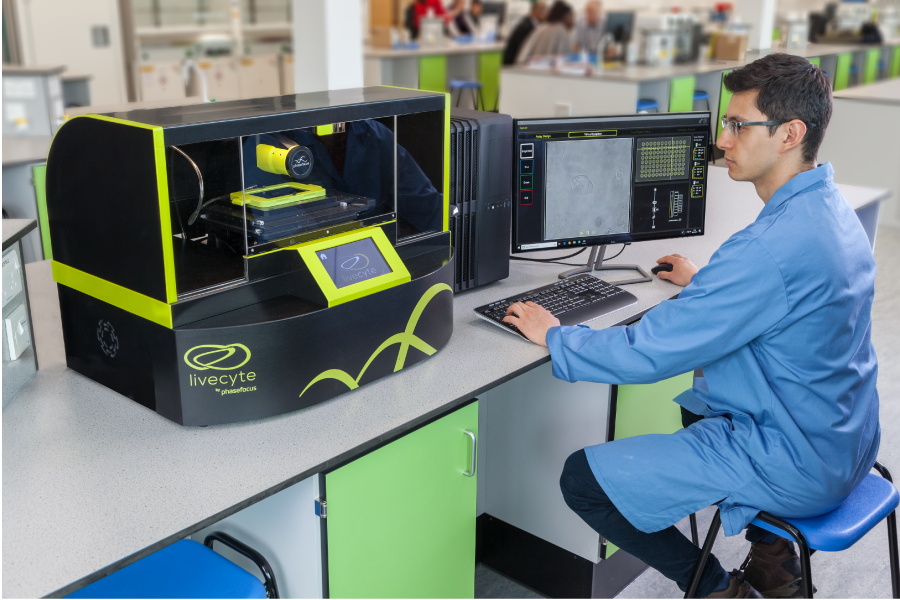 Phasefocus is a company which has developed the unique Kinetic Cytometer, Livecyte 2! This device is essentially an all-in-one microscope with an integrated incubation system, with a potent work station and high content software, enhanced with the patented QPI technology for label free analysis. In short, the device is capable of analysing thousands of cells, both unlabelled or labelled in up to 96well plate format. QPI technology (Quantitative Phase Imaging) won the “Microscope Today Innovation Award” in 2013 which led to Livecyte, also receiving this award in 2017, thus making it an interesting and recognised technology. QPI leads to computational imaging generating high contrast quantitative images from microscopy, in a process known as Ptychography. It is superior to phase contrast as cells appear as bright structures on a dark background (where there is no signal), greatly enhancing information that can be acquired from cells. This superior information will thus lead to superior data acquisition in multiple parameters to be analysed and therefore improve segmentation and differentiation of cells.

The high level of data that can be observed, is linked to user friendly software, which houses powerful algorithms leading to the ability to segment individual cells, in all the fields of view in the selected wells, granting in depth information on the cells in our assays. As such, our cultures can be assayed, as a whole, single cell or segmented by cell lineage.

The images generated by conventional bright field or phase contrast lack the level of signal-to-noise contrast, which are generated by QPI and are comparable to fluorescent imaging. However, the lack of fluorescent markers eliminates the presence of another exogenous variable on the experimental setting, thus leading to a more in vivo like setting, as well as decreased effect of damage to cells from fluorescent excitation.

A simple assay that can be run by Livecyte – cell proliferation, illustrates the advantages of the device, as depicted in Application Note 1. Livecyte counted with high accuracy cells compared to visual counting thanks to its segmentation software with a mean difference of 1.9 cells and no statistical significance, and results were comparable to an automated cell counter device approach. Furthermore, effects of drug treatment using Staurosporine (antibiotic) were automatically analysed throughout the time course for proliferation differences. This technique in addition would allow for further characterisation of the cells.

The number of options with Livecyte is growing, including a dashboard for angiogenesis (pre-release currently). Whilst fluorescent options are not excluded from Livecyte, a differential feature and advantage for this kinetic cytometer is the QPI technology employable in a variety of applications.

At Paralab Bio, we would be more than happy to book a meeting in order to discuss how this high content kinetic cytometer can help your research and that of your colleagues in further detail, from applications including oncological, stem cells, drug treatment and many more research areas.